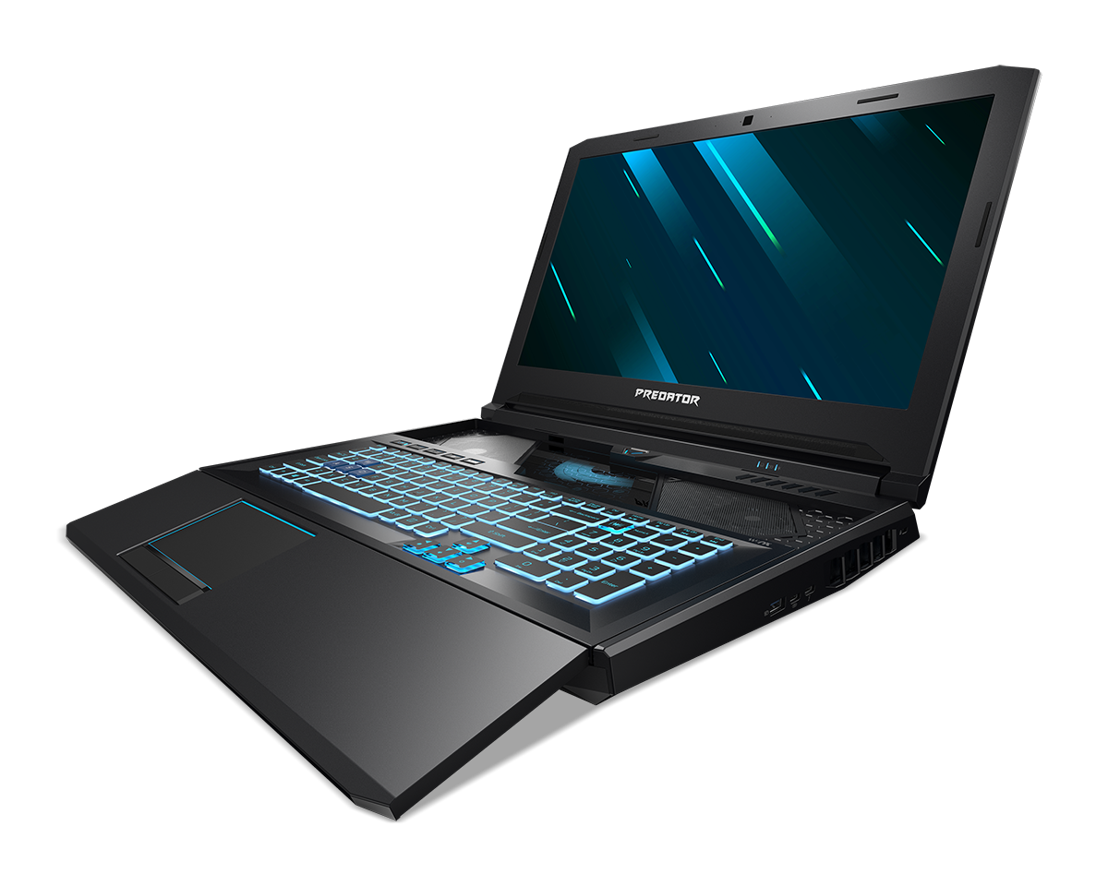 The all-new Predator Helios 700 includes a unique HyperDrift keyboard that slides forward, allowing increased airflow directly through the top of the notebook, enabling gamers to push the powerful components to their highest potential. The redesigned Predator Helios 300 includes a sleek modern look and is powered by either up to an NVIDIA® GeForce RTX™ 2070 with Max-Q Design, or the latest GeForce® GTX GPUs, yet still retains its budget-friendly price tag. It’s well-suited for task-heavy computing, as its high-end hardware provides the performance needed for gaming, streaming, and video and photo editing.

“With the new 9th Gen Intel Core processors we have taken another big step forward in delivering premium performance and platform features powering the world’s best gaming laptops,” said Steven Long, Vice President, Sales and Marketing Group and General Manager, Client Computing Group sales, Intel. “The new Predator Helios laptops are a great example of the years of close collaboration between Acer and Intel to help raise the bar on the capabilities gamers and creators should expect in a laptop.”

“It’s great to see Acer bring such a wide portfolio of gaming devices designed to meet the needs of so many different types of gamers with their new Predator and Nitro series offerings,” said Mark Linton, General Manager, Consumer and Device Sales, Microsoft Corp. “Acer continues to innovate and bring great gaming experiences to market for consumers.”

Powering the uniquely designed Predator Helios 700 notebook is an army of the latest and greatest technologies ready to battle, including up to an all new 9th Gen Intel® Core™ i9 processor for top of the line overclockable performance, an NVIDIA GeForce RTX 2080 or 2070 GPU, up to 64GB of DDR4 memory, and Killer DoubleShot™ Pro with Killer Wi-Fi 6 AX 1650 and E3000 — delivering up to four times more network capacity in dense environments than previous generation wireless AC networks — while plenty of high speed storage keeps load times short. All that power makes games roar to life on the notebook’s 17-inch 144Hz FHD IPS[1] display with 3ms response time and NVIDIA G-SYNC™ technology. Five speakers and a subwoofer keep the games immersive and engaging with full and realistic audio.

One of the Helios 700’s most interesting features is also incredibly useful. Its HyperDrift keyboard is part of the notebook’s thermal architecture, which consists of two of Acer’s custom-engineered 4th Gen AeroBlade™ 3D Fans, five copper heat pipes, a vapor chamber[2] and Acer CoolBoost™ Technology. By simply sliding the keyboard forward, two additional air intakes are uncovered above the keyboard and below the display, giving the powerful heat-generating components extra air flow for maximum cooling and unleashed overclocking. The glass panel also provides a view of the notebook’s heat pipes.

The HyperDrift keyboard improves ergonomics; with the keyboard closer now, gamers can keep a good distance to the 17-inch screen without over extending hands. It provides desktop comfort in a notebook form factor. The keyboard also features per-key RGB lighting, anti-ghosting and MagForce WASD keys. The MagForce Keys use analog-like linear switches that trigger actuation immediately upon the initial press, and increase up to 100 percent to give players more control over precise movements in the game. A Precision Touchpad is outlined with blue lighting and features two discrete mouse buttons below the pad for easy clicking.

A Turbo hotkey quickly engages overclocking while the new PredatorSense hotkey provides immediate access to CPU and GPU temperatures, fan control, RGB lighting, and more. Per-key RGB lighting also enhances online gaming with Predator RGB Assault-League of Legends (LoL)[3], by tying in the keyboard’s lighting to the action on the screen while battling in LoL.

The best-selling Predator Helios 300 gaming notebook just got better with the addition of powerful technologies and features, along with a new sophisticated design. Gamers will be most excited about the combination of up to the newest 9th Gen Intel Core i7 processors for premium performance of with the addition of the latest of a NVIDIA GeForce RTX 2070 GPU with Max-Q Design supported by a Turbo key for one-punch overclocking and Killer DoubleShot™ Pro for fast and lag-free networking. With up to 32GB of DDR4 2666MHz memory and up to two PCIe NVMe SSDs in RAID 0 plus a hard drive, it’s the powerhouse gamers crave for playing today’s AAA games.

But most noticeable is the notebook’s new look. Its metal chassis now rocks the stylish teal blue accents and keyboard backlighting found on other Predator notebooks. A narrow bezel around the display and a redesigned keyboard with contemporary looking Predator fonts give it a hip and edgy look.

Praised for being one of the first notebooks in its class to feature a 144Hz display, the new Helios 300’s bright 15.6-inch or 17.3-inch Full HD IPS[1] display is now framed by a narrow border and includes 3ms overdrive response times for a tear-free, seamless gaming experience.

Keeping the notebook running cool and at peak performance is an advanced and efficient thermal design that unlocks the true potential of the Helios’s powerful hardware. Most critical to keeping temperature low is a dual-fan cooling system that includes one of Acer’s 4th Gen AeroBlade™ 3D Fans. This latest generation fan design was inspired by bionic silent owl flight mechanics that maximize airflow and minimize noise. The new 0.1mm-thin fan blades include a serrated edge, winglets along the top and bottom, as well as a curved fin along the inner portion of each blade. This results in up to a 45 percent improvement in airflow. Coupled with strategically placed intake and exhaust vents and Acer CoolBoost™ technology, the Helios 300 stays calm under pressure and handles intense overclocked gaming sessions with ease.

Last but not least is a completely new keyboard featuring distinctive Predator fonts and 4-zone RGB lighting. Usability and functionality are improved with new PredatorSense and Turbo hotkeys, an enlarged spacebar, and concave-shaped, highlighted WASD keys, arrow keys, and hotkeys.

The new Predator Helios 700 and Helios 300 notebooks were unveiled today at the next@acer press event held in New York, where the company announced a range of new devices and solutions for gamers, creators, families, students and professionals. For more information, visit www.acer.com/nextatacer.

[1] All brands and product names mentioned herein include trademarks of their respective companies and are used solely to describe or identify the products
[2] Vapor chamber not available on all models
[3] Overwolf software required in order to use. Game availability for use with RGB Assault varies